What is a Dataset API?

Interested developers, data scientists and data consumers can build applications which can fetch NADI.BN's data via these APIs.

Each dataset, can have one or more APIs.

To view the list of APIs available for each dataset, click the Data API tab of any NADI.BN dataset

Clicking the Data API tab will list down the APIs available for that dataset via a 'Swagger' documentation. 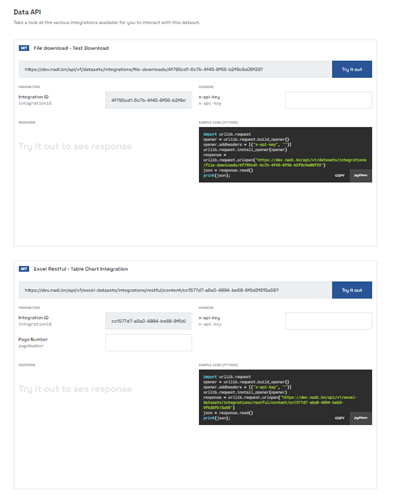 The swagger doc explains how to call the API and displays the respective expected response for an API call.

Developers may also test the Data API via the swagger doc.

Data API requests need to be authenticated. Authentication is done via a token.

Once signed in, a member can log-in and create up to three projects.

What is a Project

A NADI.BN member may create up to three NADI.BN projects. A project represents a task that a group of API keys are expected to be used for.

By default, NADI.BN members, can create up to three projects. The maximum number of projects can be increased by contacting a NADI.BN administrator.

Projects can be managed here after signing in as NADI.BN member.

What is an API Key?

An API key is a token that allows you to make requests to Dataset API. The token needs to be added into the header of the API request in the following format:

A NADI.BN member can create up to 3 API keys per project. The maximum number of API keys can be extended by contact a NADI.BN administrator.

Dataset API's are rate limited per api key to ensure fair access to the system for all NADI.BN members.

By default, the rate limit is 6 request per minute.

These rate limits can be reduced upon request by contacting a NADI.BN administrator